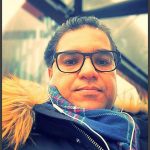 No to the dictatorial regime of the Islamic Republic.

I believe that no matter how forgiving a person is, he/ she cannot be apathetic to the crimes of the Islamic Republic of Iran to different sections of the people, whether political or religious, and turn a blind eye to the crimes of this regime for 40 years.

The day after the victory of the Revolution of 1978, the regime established its base on the basis of the Islam and religion and used all its external and internal resources to maintain the system.

The regime that irrigated the foundations of their domination with the blood of the youth of in 70’s and continues to this day. Unfortunately, instead of hearing the voices of the people, they answer them with execution, bullets and imprisonment.

Unfortunately, Iran has done the most oppression to religious minorities, including Christians and imprisoned or executed them, and even destroyed many Christian churches and cemeteries in Iran. This is because of the fear that has crept into the regime and now most Iranians have heard the voice of Jesus and the message of their God and turned to house churches to receive salvation.

I wish we could get rid of this regime without conflict and bloodshed and had a free Iran. But Seyyed Ali Khamenei has shown that he will not give up war and bloodshed until the last moment of his life. He is thirsty for blood and loves the blood of Iranian people and he is not afraid that his name will be registered in the world along with other dictators such as Hitler, Stalin, Saddam, etc.

I am heartbroken by all this injustice in Iran. I do not think that we can leave the Islamic Republic behind without war and bloodshed but only…

We are facing a bitter reality, because the super leader of Iran has no doubt for a moment about the sanctity of the path ahead (we can refer to the statement of 14 people who wrote a letter to him and all of them are currently in prison).

There is no doubt in the holy matter that Seyyed Ali Khamenei is trying to preserve this holy regime and system in any way and this is his biggest task. The order is from higher, higher than the clouds, higher than the skies. We are too small to disrupt it! Because the one who holds a gun does not respect human and human values. The only weapon of the Iranian people is to pray and wait for a miracle from God!

I am very upset about this sensitive historical period of my land, Iran.  I think of the extraordinary force whose existence is necessary in the land of Iran. To touch the hearts of the people and politicians of Iran and the world so that all people can achieve freedom and peace and have a world without borders. I want we have a world full of peace and freedom together and live together in peace and freedom.